Show Me The Numbers

So … seriously, how often are you having real sex right now?

Be honest, and don’t fudge. Next, stand back, look at the calendar and decide how you feel about your sexual frequency as it appears on the page. If you’re pleased, fantastic! Keep doing what you’re doing.

If you’re less than pleased, you have some work to do.

Guys quantify to locate the truth. When you ask yourself the question, “When was the last time?” in any scenario, it corrects us from a merely hopeful world to reality with form.

A friend asked me how many days must pass before I become sexually frustrated. To this rather direct question, I replied simply, “about three”. Yes! he shouted and flipped a calendar open to October. He stabbed his finger at the 17th — the last copulatory event of his long-term partnership. It was now March.

When all you have is sexual intention … well, then at the end of the day you only end up with sexual regret. March, for any of us, comes pretty quickly.

My steps to intimacy are pretty simple:

While it sounds elementary (and it is) it really works! If naked play with your partner falls off for days or weeks or months and you lay awake night after night chewing your knuckles, you need to do all four steps right away.

Intentions remain intentions until you put them on a schedule. Now they are plans.

Sexual plans remove the burden of wishful thinking from your mind. Once you schedule sex play you create accountability for yourself and your partner. Now, you have the liberty to do the plan, change the plan or cancel the plan. No regrets develop because you decided what you will do. 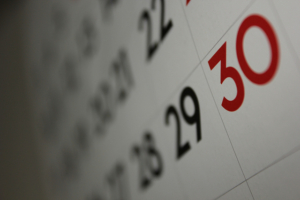 Here’s an easy way to make your sex play plan work. Try this calendar or create something of your own imagining, but schedule your plan or it remains intention and you’re back to gnawing the bedpost.

Now you have a plan! You’ll feel the tension go out of your sex play times simply because the last time wasn’t that long ago and you know when the next time will be. Keep working it.